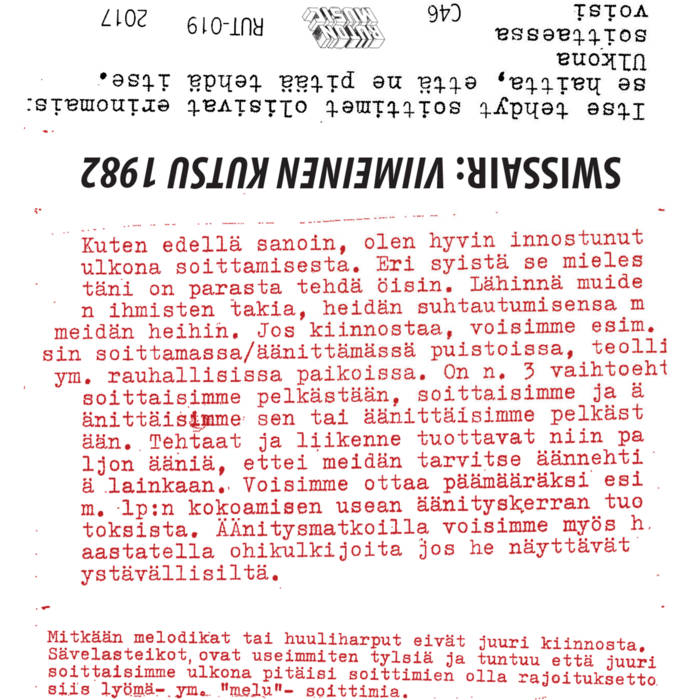 The first track on "Viimeinen kutsu 1982" ("Last Call 1982"), "Ooppera" was recorded during that spring by Anton Nikkilä and Mika Taanila, who since 1980 had ran the cassette label Valtavat Ihmesilmälasit Records that released all of Swissair's four albums. "Ooppera" was musically inspired by The Residents' opera "Not Available", which coincidentally was not meant to be released until its creators had forgotten about its existence; "Ooppera" remained unreleased after Taanila and Nikkilä's label faded out in early 1982, when its activity had begun to feel limiting, tame and hobbyist compared to newly-discovered ideas of Cage and Fluxus.

In June, however, Nikkilä summoned Swissair for a two-day long recording session in his mother's flat while she was out of town. The session was preceded by handing out typed instructions that detailed various "procedural" methods to be used in the session, written in a mock-bureaucratese probably reflecting his pilgrimages to the art section of Töölö library. Excerpts from this text and his contemporaneous letters to Swissair members are reprinted on the cover art of "Viimeinen kutsu 1982", and some of the track titles for these originally untitled recordings are lifted therein as well.

The second track of the cassette, "We Could Interview Passers-By If They Seem Friendly" was recorded just before dawn on the first night of the session in a remote corner of a public park in the center of Helsinki using a small battery-operated Soviet Faemi synthesizer, a battery-operated Roland drum machine, an acoustic guitar and an assortment of toy instruments and percussion. Here the method was loose – "free improvisation" – but the context was what it was all about, something far removed from the conventional confines of home studio, rehearsal space, street busking or music culture in general. Timing was perfect: the night after the Finnish midsummer night carnival was, before deregulation, the EU and globalisation, a moment when Helsinki seemed completely deserted of both inhabitants and the few tourists visiting the town.

The recordings on the B-side of "Viimeinen kutsu 1982" were done the following day with four Swissair members in a traditional lineup of two electric guitars, bass and drums. They were described by the Finnish writer and musician Juuso Paaso in this way in 2010, when he interviewed Swissair's members for his article Lasten neuroretki ("Children's Neuro-ade") about the band: "The aim was to play music that would be as unmusical as possible and in which no structures, rhythms, melodies and especially group playing could be discerned. Adapting an idea introduced by Brian Eno, each player had in his headphones a recording of a metronome that ticked in a different tempo from all the others, and trying to play along to it was supposed to eliminate any possibility of group playing." Naturally there remained traces of the listening habits of the quartet – in this case, harmolodics and other kinds of free jazz as well as the simplistic guitar style of Wire and The Velvet Underground ­– filtered through a near-complete lack of "chops" and interest in developing them, resulting in a very specific kind of collapsing rock.

Edited and mixed by Anton Nikkilä in 2017.

First released by Ruton Music in 2017 as a cassette in an edition of 75 copies, which are sold out.